Where to Find Classic Cars and Buses 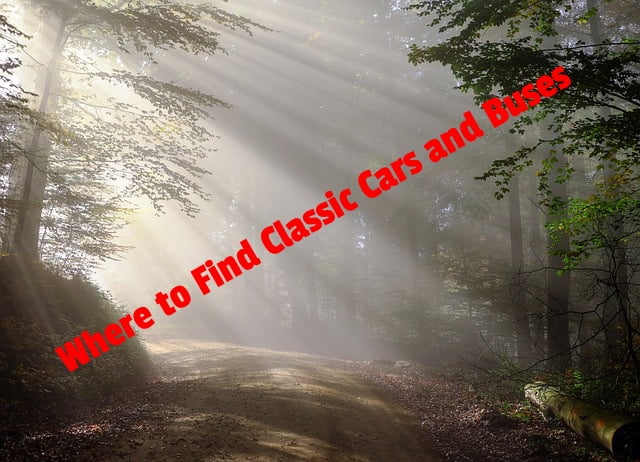 If you're looking for one of your own, you might want to take this bit of advice on where to find classic cars that are hiding in plain sight. OK, maybe not exactly plain sight. Maybe hidden deep in the woods. Or, maybe covered by a pile of junk in a dilapidated barn. Maybe even tucked away in some forgotten corner of a junkyard.

Or... on the Samba! Or, like with Marc and Dena's Cherry Bomb, at a car show.

I asked Spook about this middle-of-the-woods scenario, and he tipped his hat to these guys. What they did wasn't easy. If you're thinking about doing something similar, here's a few pointers:

If you decide to work on it in situ, you're going to have to lug a bunch o' stuff with you if you want to drive it out of the woods. A jack, a full set of basic tools, and acetylene torches to wrestle those rusted nuts and bolts off (heavy and flammable, so be careful!).

"I would have done the same as a young guy. I'm pulling 50 now (as opposed to pushing it!). I like to be warm, dry, and not have bugs crawling up my neck. I don't camp." So now you have the final word on getting him out to the woods in a rescue for your find!

Probably a LOT easier to just tow it out - and then to the shop. But where's the adventure in that?!

For many vintage car enthusiasts, the barn find is their Holy Grail. They dream of one day stumbling onto a rare classic that's been stored for so may years, the original owner most likely forgot it was there. Then, they can begin the process of bringing their find back to life and restoring it to its former glory.

What about a forest find, though? Cars left in the woods don't get nearly the same protection from the elements, but still. Sometimes they can still be restored. After all, that's exactly what happened here.

Florian George, an air-cooled Volkswagen enthusiast who works for AirMapp—a website and social network for fans of air-cooled VWs—heard someone had abandoned a 1955 Volkswagen Type II panel van in the woods near his house. After finding the owner and buying the van, he originally planned to pull it out with a tractor.

But then he got a crazy idea. What if he and his friends could fix up the van enough for it to drive out under its own power? Surprisingly, it actually worked. Check out the video below to see the story of how they got it done.