What Does a Car Painter Do at SEMA? 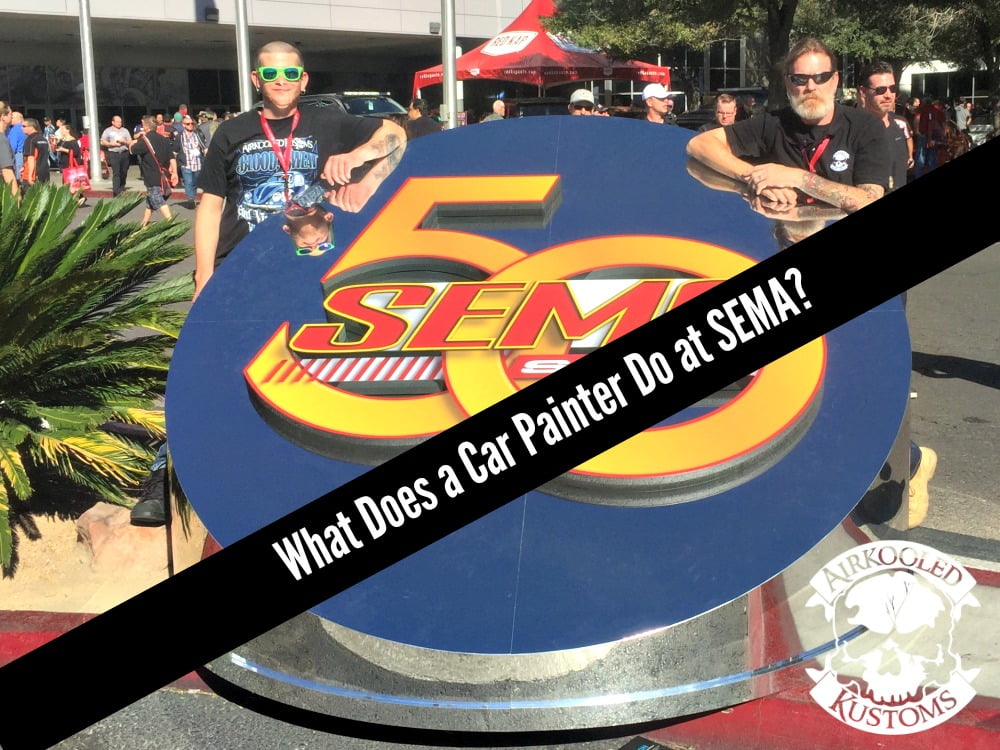 What Does a Car Painter Do at SEMA? Drool, Schmooze, and Absorb 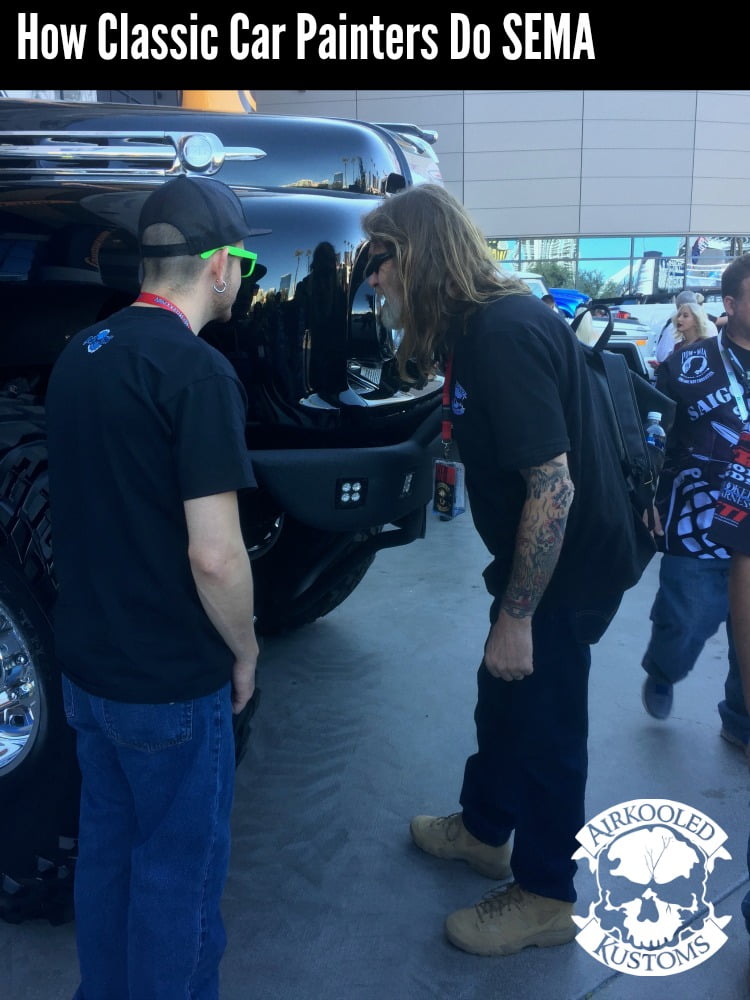 Anyone who knows Spook well enough to walk a car show's grounds with him knows that you'll get his no-nonsense take on what he sees there. So, what do car painters like him and his son Thomas do while exploring a show the calibre of SEMA?

Most days we walked about 18K steps as we explored the acres and acres of exhibits that made up SEMA's 50th annual show in Las Vegas. This, with Spook's broken toe (and still-healing broken ribs).

We took LOTS of pictures of SEMA 2016 - hundreds of them. Check them out and let us know what catches your eye.

It can take a bit to digest THAT much input - and we got Spook to give us the lowdown on the top five trends he noticed at this year's show. Here they are. 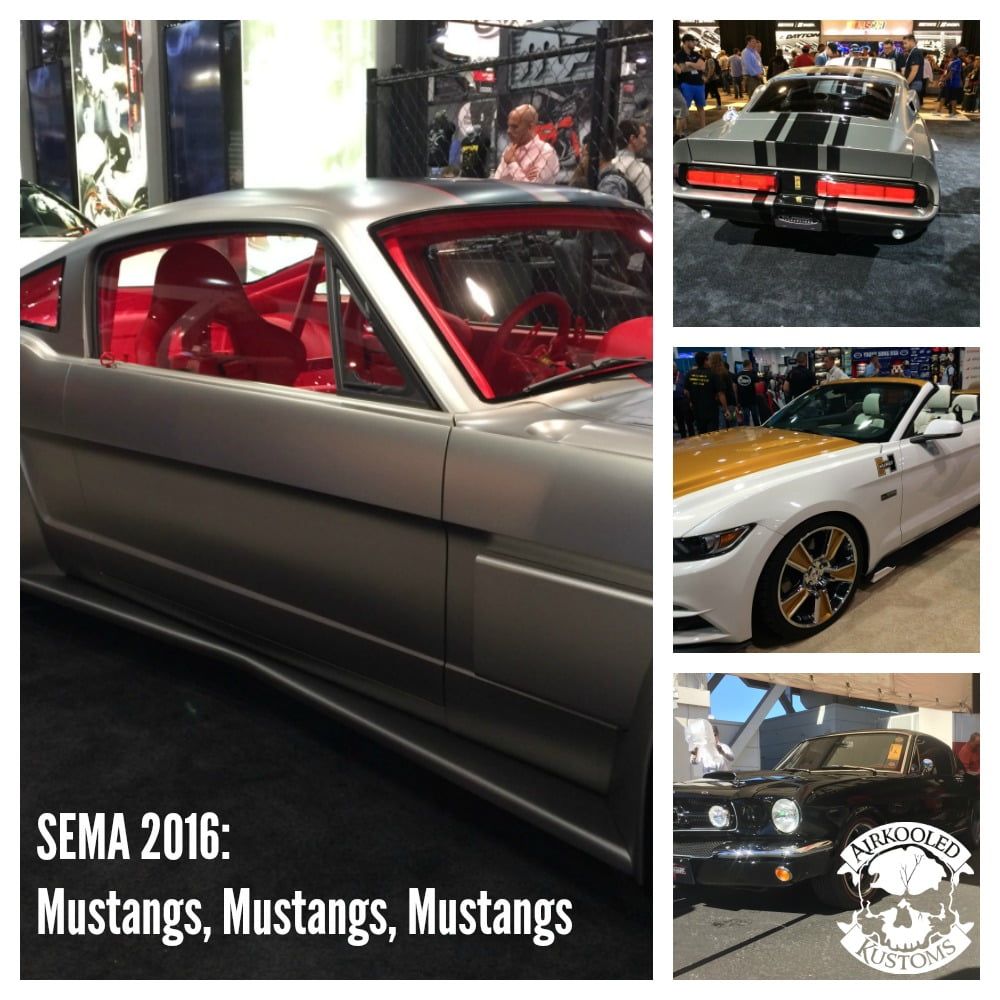 It seemed like everyone got the memo: Build a Mustang for the show this year. Ford had a huge presence at the show, and everywhere you looked, there were Mustangs. OK, there were also some Jeeps, Ford trucks, and a hefty helping of mid-90's Porsches... but mostly, there were Mustangs. He's not much of a Mustang guy, but he did appreciate seeing so many variations of the same car. 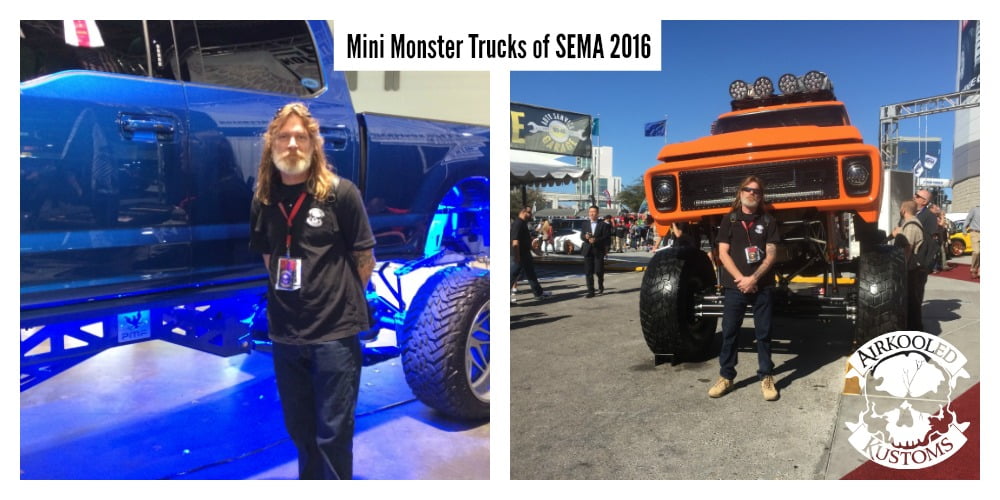 When Spook's 6' 3" frame is dwarfed by a truck's body, it might be too big. The engineering is beautiful, and who wouldn't want to own the whole road by driving a gargantuan vehicle on it? Spook's '97 OBS F250 looked like a Matchbox compared with these behemoths. 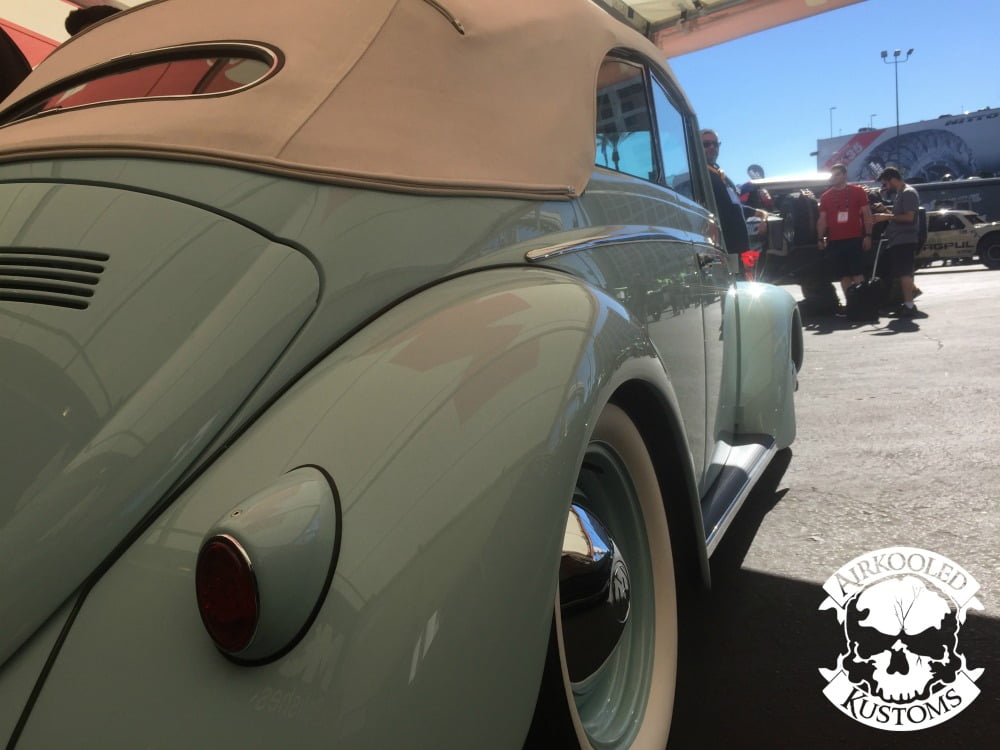 We saw a FEW classic Dubs, but not many. In fact, there weren't many classic cars at all - a few, and some of them were jaw-droppingly gorgeous - and they seemed to draw more crowds than the herd drew. Might be an indicator exhibitors should pay attention to next year... build something more interesting, and people will flock to it. 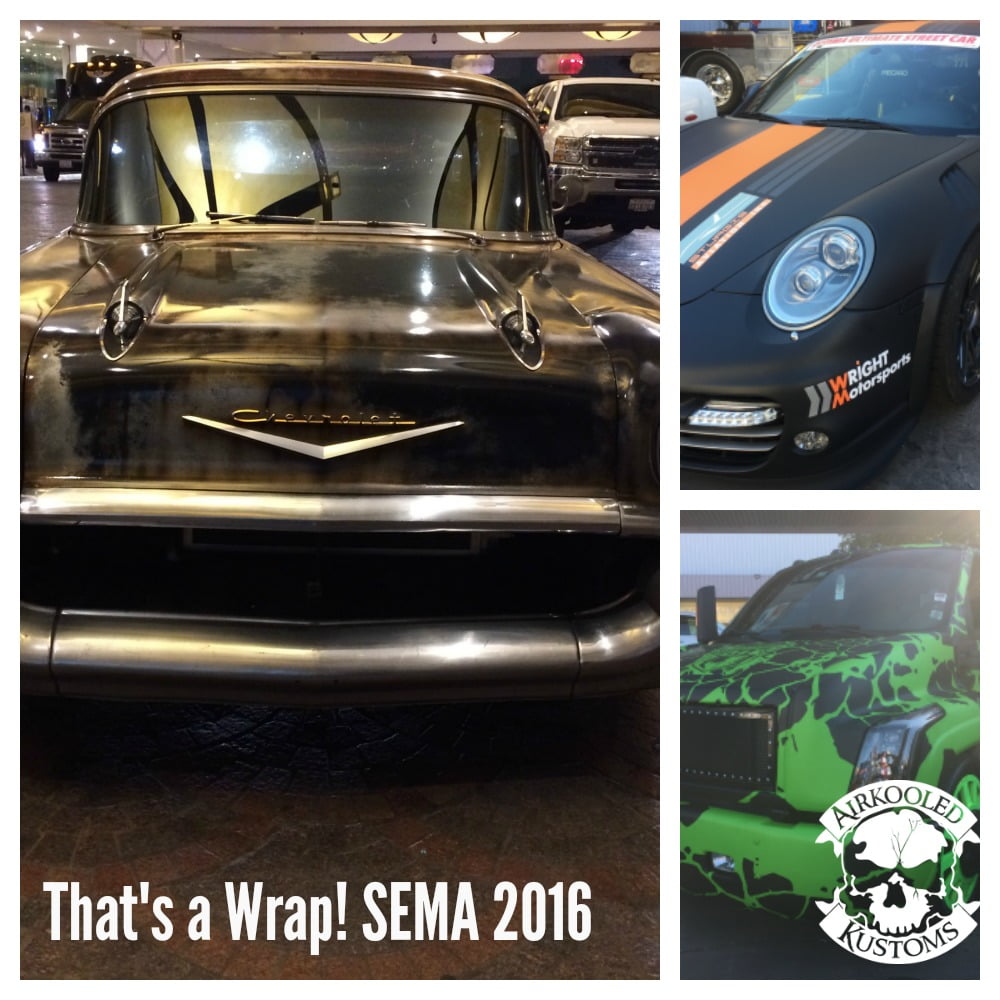 Combine this trend with the last one (maybe half of those Mustangs were wrapped), and you'll understand a correlation he made between wrapped Mustangs and booth bunnies (also everywhere)...

Once you've seen half a dozen, you've seen them all. Different shapes, sizes, and colors - some with more meat on the rolling edge than others... but overall, not particularly interesting.

What does a car painter do when he sees wraps? Usually, he kind of makes 'that' face - you know, with the one eyebrow up. You see, wraps ARE kind of cool because your options are virtually unlimited. You can fake a paint job and come up with practically any look you can imagine. 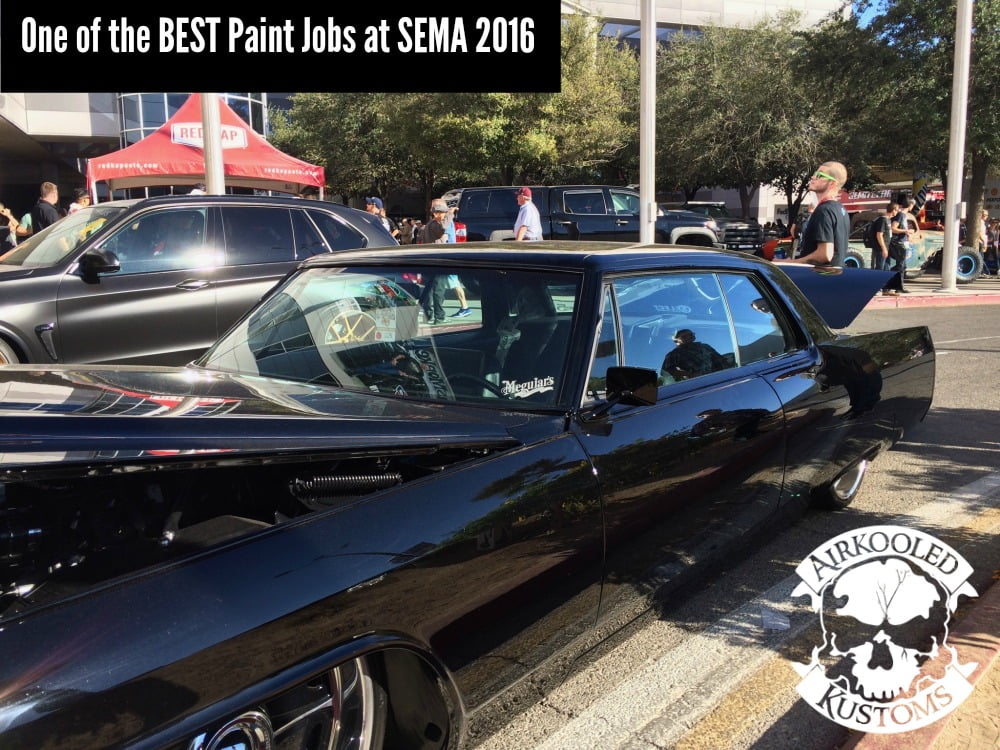 It wasn't ALL wraps at SEMA, of course. Some builders went with paint finishes. A few even did it well, like this Caddy with the L-O-N-G straight panels and near-flawless paint.

All the work that went into building cars worthy of this magnificent event was easy to see. Innovation, brilliant engineering, creative design - it was all there. So it was puzzling to see many vehicles with a fit and finish that was lacking. Orange peel, incomplete polish processes (hologramming), and lack of attention to detail kind of drove him nuts.

No doubt there's a major crunch time right before completing a build and getting it out to the show. While the builders did a spectacular job on the builds, many shorted themselves when it came time to do paint and polish. Because of this, many of the cars felt somehow incomplete, rushed, and lacking... in the one element that takes up so much of the build's overall appearance.

So much to see, so many cool peeps to meet - a great trip out to Vegas that we'll definitely do again.

Related SEMA Show 2016: Another Amazing Year In the Books

Looking for "VW restoration shops near me" because your heart and mind can't stop dreaming of getting your own ride? Coast to coast in the United States, Airkooled Kustoms has you covered. Even if you're nowhere near beautiful Hazel Green, Alabama, don't assume you have to settle for a shop in your own backyard. More than half of our clients come from lands far, far away. They either ship their vehicle to us (affordable in the grand scheme of things) or have us source one for them. That said, click or call 256-828-2123 to start the conversation about YOUR build.