How Do You Pronounce Karmann Ghia? 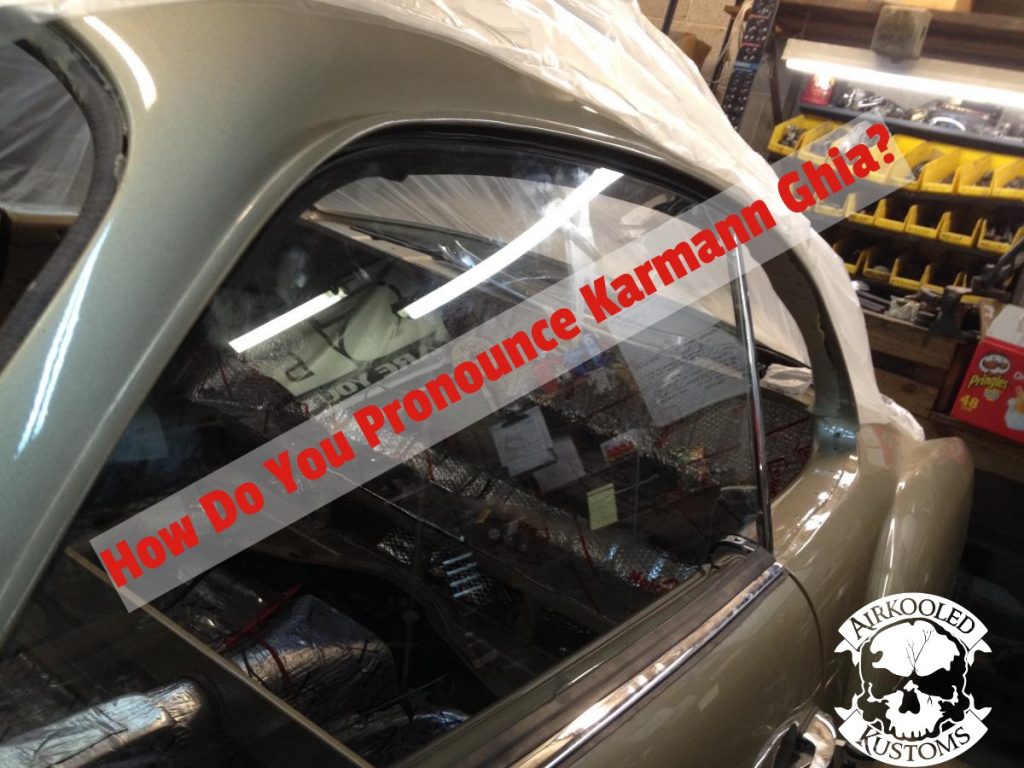 How Do You Pronounce Karmann Ghia Razor? 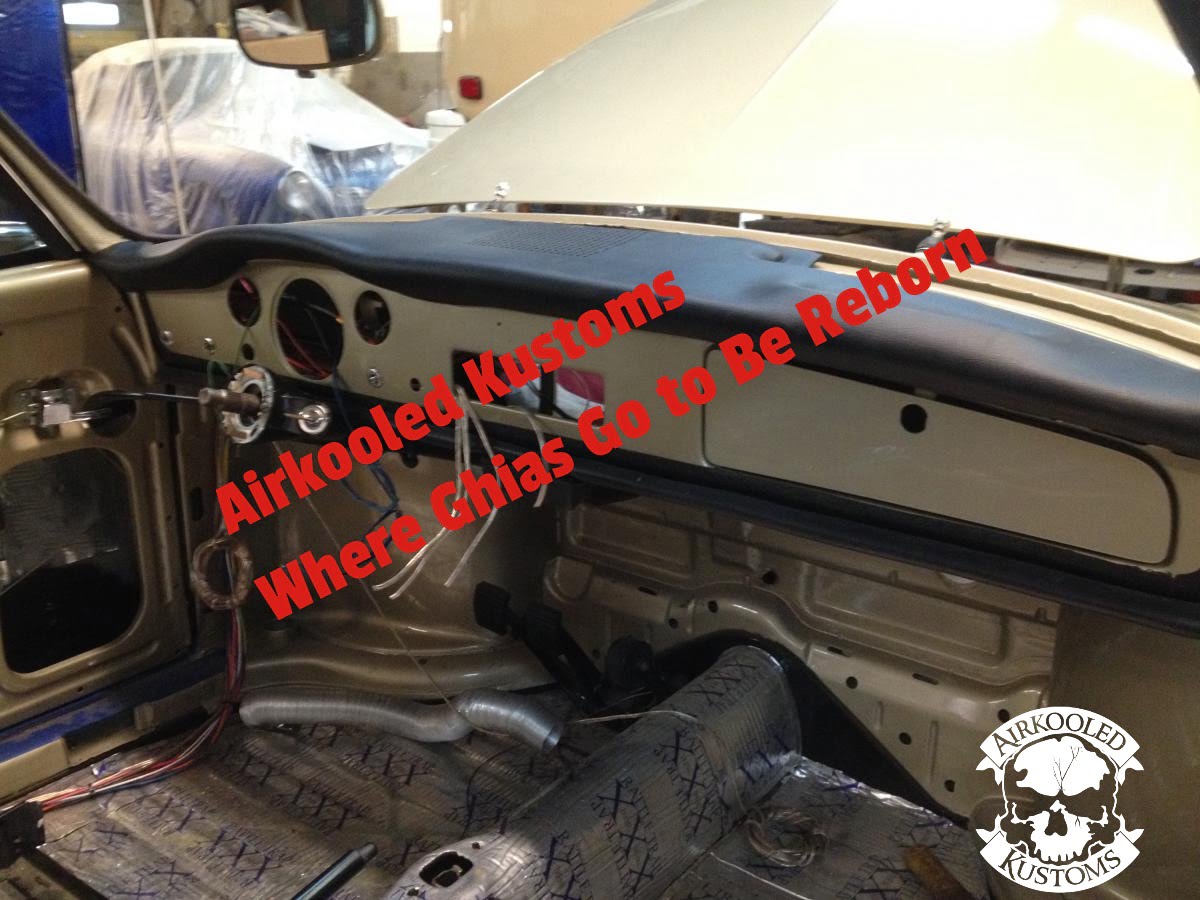 We'd sure love to get our dirty, bloody, bruised, greasy, and burnt hands on a Razor Ghia to restore. We've got a  gorgeous 1969 Ghia on the floor right now, and you can see more than 1,000 build pics, too.

Want to know our restoration process, start to finish? Check out Blood, Sweat, and Vintage Steel on Amazon.

If you’re a VW purist you may want to stop reading now, because this is not your average build.

Way back in 2000 while in high school, Las Vegas local Richard Jones purchased what was then a mostly factory 1965 Volkswagen Type 34 Karmann Ghia as a daily driver for his girlfriend, Shannon.

While most VWs tend to let you know just before they’re about to give up with a host of warning lights, this car was built before that type of technology existed, and not too long into ownership, the original engine decided to quit. Richard decided this would be a perfect time to swap in a big 2443cc motor and take it street racing. This went on for a few years before that motor blew too, and at that time Shannon handed the car back to Richard. “That is when the fun began,” he says.

Richard would always pick up custom truck magazines like Mini Truckin’ and see everything on adjustable suspension, allowing them to lay completely flat on the ground. He set a goal to get his car as low as he could, but he had no experience with suspension design or metal work. Richard put some time into reading and gathering as much information on the subject as possible, and in eight short months he had the front suspension on a cantilever setup using air cans, while the rear was bagged. He would then use his newfound knowledge to create a factory-looking, right-hand drive dashboard.

Now that the VW’s stance was taken care of, Richard started to hunt down parts for the outside of the vehicle. Realizing that people didn’t give up these rare components easily or cheaply, he purchased two parts cars to get the finishing pieces required.

Richard and his family enjoyed the Ghia for a few years until one day another car pulled out in front of him. The resulting collision destroyed all of the front sheet metal and bent the pan. Richard was left heart broken; all of his hard work had just been undone in a split second. But he didn’t let the wreck get to him for long, and soon decided that a rebuild should happen. He persuaded the insurance company to not total it, as a salvage title would put a damper on the history of the car.

Richard went back and forth trying to decide what he should do, but he knew he wanted to push his capabilities to the limit. In the end, his goal was to mix his love for VWs and mini trucks to create a one-off custom. The Ghia was taken to the side yard of his house, braced, roof cut off, and flipped upside down in order for Richard to start fabricating an entirely new suspension setup. This is where all the years of research would come into play as he hand-built a full tube-frame chassis.

The air suspension was replaced with a 24-volt, single-pump, six-dump hydraulic setup with accumulators using Dice Suspension manifolds and cylinders all powered by two Odyssey batteries.

Given that the chassis and suspension had been completely customized, there was no way Richard was going to run a predictable motor. Instead, he opted for a naturally aspirated Mazda 13B twin-rotor engine out of an FC3S Mazda RX-7.

The bridgeported 13B sucks air and fuel through a 48mm Weber carburetor mounted to a RotaryShack manifold, while spark is provided by MSD coils and a 6AL module. Richard custom built a 2-inch steel header running into a 2.5-inch stainless muffler, and swapped the stock pulleys for a Gilmer Drive belt setup to keep things turning in the right direction. That trademark Gilmer sound doesn’t hurt either.

More than air would be needed to keep the motor nice and cool now, so Richard installed a 4-core custom-built radiator with two electric fans, and hand-made an aluminum expansion tank and overflow box. As for the driveline, that consists of a Volkswagen Type 2 091 gearbox with race-prepped Type 2 CVs, a lightened flywheel and a 2400lb clutch.

With all of this custom momentum, Richard couldn’t leave the brake system factory either. A Wilwood Pro Spindle brake kit along with Wilwood 4-piston calipers all around fed by CNC master cylinders were installed to make sure stopping power was up to task. Rounding it all out is a rack and pinion steering setup designed for a sand car.

Richard knew he wanted to run larger wheels, so while the car’s chassis was being built he tubbed the wells. The triple-laced Dayton wire wheels that were chosen for the build are not what you’d usually see on a VW, but they work so well. The fronts are 17×7-inch wrapped in Yokohama 195/40R17s, while the rears are 18×8-inch with 215/35R18s.

Even with all of these modifications, Richard wanted to keep the outside relatively factory but with a few personal touches. He’d come this far, so why not, right? The fresh air vents were deleted along with the door locks and wipers. The engine compartment also got some custom sheet metal work in order to fit the new power plant.

You’ve Got Red On You

Richard spent plenty of time and money inside the car too, and the new blood-red leather retrim contrasts perfectly with the VW’s off-white exterior.

As you can see, it’s been one long adventure getting the Ghia to where it is now. Richard has pushed through the aggravation of having his car almost totaled, which is a tough thing to do when you’ve watched your dreams literally crushed in front of your eyes.

Most people would have thrown in the towel at this point, but Richard has a very strong support group he surrounds himself with. First and foremost he would like to thank his now wife Shannon Jones. He says her love and faith in him, and her awesome sandwich making skills, kept him going throughout all the trials and tribulations. Thanks also go out to Juan at Snail Motorsports for the powder-coating, Corey for installing the Rebel wiring harness, Chris for rebuilding the engine, as well as Kevin, Marcus, Brien, Keith, AcroSean, Joe, Whiz, Lauren, Jake, Alex, Shane, and Tom Carsten (RIP) for their inspiration to think differently and to push the bar.

This car proves that with the right people and the pursuit of educating yourself, you can do anything. Mistakes and tragic events may happen along the way, but in the end, if you keep pushing yourself and surrounding yourself with a good crew, amazing things can happen.

via German Rotary Dreams: The 13B Karmann Ghia - Speedhunters