Who Drives Volkswagens THIS Old? 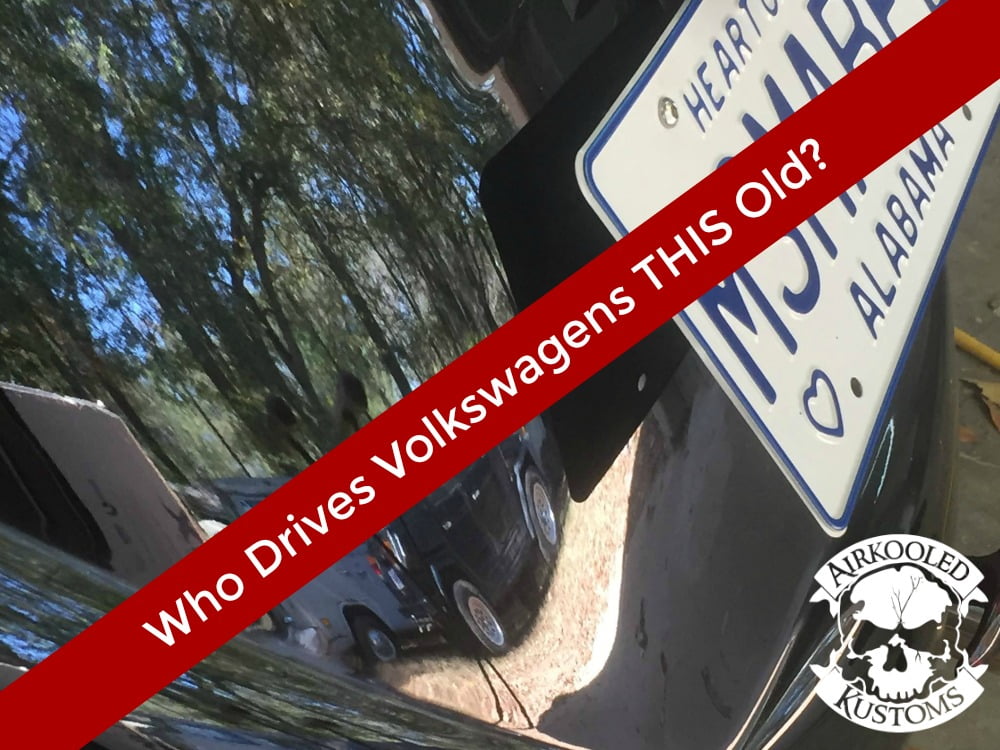 Want to Know Who Drives Volkswagens THIS Old - ME. That's Who.

What's the scoop with a person who drives Volkswagens that are museum-quality, one-of-a-kind, and polished to a mirror shine?

Crazy? Maybe - no argument there, but maybe not in relation to the driving thing.

The whole time Airkooled Kustoms was building Miss Mabel, the 1959 VW Ragtop Beetle that took People's Choice at the 2015 Ultimate VW Build-Off in Las Vegas, I kept picturing what it would be like to drive her.

I probably wasn't alone in that - but for the others who harbored such fantasies, it'll never be more than that. For me, it's nearing the time when I'll take delivery of that saucy and sinister babe on wheels.

First, the guys will raise her up just a smidge. You know, so that hitting a penny on the road doesn't constitute a crash.

There are also a few other minor adjustments and some repair work to the paint in a few places. She did well on the show circuit, but transport and proximity to people are minor hazards to be expected.

As long as the weather's fine...

As long as it's only to putter around town...

As long as it's daylight...

Then I'll drive her. With a big smile.

Does the Thought Terrify You?

If the whole idea of driving your restored classic car feels about as wreckless as wandering the streets holding onto a Picasso by the edges of the canvas, that's understandable. But maybe it's the best possible way to enjoy your ride.

Here's a piece that may sway you into the driver's seat.

It was a good day for an apocalypse.

It was just a few hairs short of 100 degrees; the sun was bright as a nuclear bomb; the sky was greasy with tomorrow’s rain. The entirety of Long Island smelled like it was sweating. The news was all tanks in Turkey and guns in Orlando and killer fucking viruses carried by bugs we already hated even before they took up new hobbies.

It had been bumper-to-bumper traffic all the way down from Connecticut and was still choked now between closely planted streetlights. My Evo coughed up blood at a stoplight; it had always been unenthusiastic with air conditioning, but since the engine swap, running the A/C had become a wasting disease.

A kid in a Subaru listlessly gave me the finger. I returned it, but without enthusiasm. Keeping up the Mitsu-Subie rivalry seemed pointless in light of the looming end of the world.

We—my lover and I—were in my Evo X on our way to take a look at a BMW, a 1991 E34 M5 that seemed like it might be worth a three-hour detour. A lifetime of checking out used cars had given me a certain set of expectations about where cars like it were usually found. A chain-link girdled lot grid-locked with imports, maybe. In a cracked driveway, backed against the recycling bin like the old family appliance it was, perhaps. Behind townhouse garage doors, resting peacefully in a bed feathered with repair receipts.

That was not where this BMW was located.

This one was kept at a place called Deluxe Car Storage & Sales Gallery. A brisk black fence protected an empty parking lot; the cars were hidden within the warehouse. The Evo was breathing hard from its run down from Connecticut, so I removed its bridle and let it lay on the asphalt out front while we went to find our salesman.

Inside, a seating area was populated only with leather chairs and big screen TVs. A glass wall allowed visitors to see what they were waiting for: one of the dozens of luxury cars parked in the dim vast space on the other side. I found myself peering through the glass at what I thought was a ’64 Ferrari 250 GT Berlinetta. It peered back at me. I died for beauty, it whispered through the glass.

“Do you want to look around while I pull the BMW out?” our salesman asked. Steve. I’m pretty sure his name was Steve. If it was not Steve, he was so overwhelmingly Steve-like that Steve will do fine for the duration. It took me a moment to realize why he was offering the look-see: not to lure me into purchasing the XKE or the Carrera I could see from where I stood, but simply to admire.

I wound through the luxury automobiles as fluorescents came to life overhead. Here was a Chevelle, frowning pensively at me. There was a 280 SL, ears perked, waiting for a walk that never came. Here a passel of new Porsches looking clannish together. There was an assortment of Lamborghinis. One Lambo for sorrow, two for mirth, three for a funeral, four for a birth. Here was a pair of newer Ferraris, each tethered to this mortal coil by extension cords leading from wall to battery.

It was all very… stationary.

Steve pointed out the matching number princesses and the low mileage princes, but I couldn’t quite work up a froth over them. A low mileage sports car is like an attorney who’s never gone to trial. They were pretty, but this was a wax museum.

What’s a car without a driver? An art installation. Until you turn the key, it’s all theory, really.

There’s a phrase that’s been used to justify more vehicular comas than any other: “daily driver.” I’ll be at a gas station kicking some mud off the bottom of my ‘73 Camaro after doing a bit of non-asphalt exploration and here’s some guy telling me he likes the Camaro, he’s got a ’69 himself.

Daily driver in this case means something like a Toyota Solara, which is a car I have to Google every time I hear the name because I can’t remember what it looks like even while I’m looking at it.

My daily driver is my boosted Evo or my boosted 370Z. The ’73 Camaro, according to the State of Virginia and my tax paperwork, is my “business vehicle.” I’ve put 50,000 miles on the Evo in the last two years, 8,000 on the Nissan since I picked it up this spring, and 15,000 on the Camaro in the last three years.

The Camaro’s been to the track, the Evo was on a dirt oval, and the Nissan’s first skidplate is crumpled and hanging in a library in Tennessee with my name signed on the corner. I’ve been informed by countless souls that I have devalued all of them.

I reckon that really depends what currency you’re figuring their value in.

Who did I buy them for? Me, or the body that’s gonna sit in them after me? Life’s fucking short and anyhow, the world’s going to end soon, so I might as well put the miles on them.

I just had to Google Toyota Solara again.

It turned out Steve doesn’t even really have a daily driver.

I asked him about it the next day; we’d returned for the BMW. Steve told me he was a Porsche man, but he has a root beer Honda Element. It wasn’t in the lot though; he usually traveled, he said ruefully, via train and bicycle. His Porsches remained garaged. I was outraged on his behalf—this was like finding a pastry chef on a low-fat diet—but he assured me it was practical.

It was a good word for this place, the Deluxe Car Storage facility. It was practical to store your investments here where they would not devalue in this market.

My cells were slowly dying as I hurtled toward my expiration date, and none of these cars had moved since yesterday. Were they cars or were they assets? Did it matter that Corvette there had 425 horsepower at 6400 rpm if it never moved? Did it matter if it ran perfectly because it had low mileage if the engine never got to turn over? Was it thrilling enough to know its potential?

I googled “root beer Honda Element,” and then I asked Steve’s cohort if he wanted to go tear up Long Island in my Evo while my lover and Steve finished up the BMW’s paperwork. We did; it was fun; I can’t go back to Long Island now, but I’m not sorry. That car was built for making a mess in third gear.

We returned to find Steve checking his watch beside a Lamborghini. He needed to make sure he made his train back. I asked him about the Lambo and he told me the guy wanted him to sell it, but every time the dude took it out on a drive, he was killing its value. What a waste.

Really, it depends on your definition of waste.

I feel bad that I can’t fact-check if Steve’s name is really Steve. Look, Steve, I know you gave me your card, but I put it in the console with 50,000 miles worth of gas receipts and they all busted out under the seats when I was digging in there for toll change in New Jersey.

Here’s the thing about Steve: he’s an artist.

I learned this on the second day while I was poking around all the theoretical horsepower in the building. Steve had gone to school for art and had a proper studio and had spent years in New York City. When he hadn’t made it big with his art, he’d fallen back into detailing and selling cars.

I asked to see his art, and he pulled it up on his phone.

He was good. Pretty damn good, actually. It was a bit of a mind-fuck, really, to be looking at Steve, and seeing him both as Steve, perfectly fine car salesman, but to know now that there was also Steve, much better painter. He was standing there with all that unused potential in him, and instead of screaming through life with paint smeared on his arms as he drove his Porsches out of Long Island at 2 in the morning, he was plugged into the wall of a luxury car storage facility next to all the other assets that never got to do what they were made for, either.

I died for beauty, but was scarce

Adjusted in the tomb,

When one who died for truth was lain

In an adjoining room.

I’d rather drive my cars to death. Future generations might not have my ’73 Camaro to admire, but they’ll at least have the stories that came from the previous generation flogging the hell out of it.

Are we a generation of doers, or are we merely marking time in hopes that the next generation will be? The currency is time, and it spends whether or not you bought anything with it.

Sometimes I feel like nobody learned anything from Ferris Bueller.

Maggie Stiefvater is a novelist, musician, car enthusiast and occasional rally driver based in Virginia.

via Drive Your Fucking Classic Car