Bumble Bee was built as a gift for a girlfriend – can you believe that? Smart guy – of course she married him! After all, who could resist a suitor like that? Over the course of Bumble Bee’s build, here are some of the improvements we made:

The shop also created a cleaner bodyline by fixing the rusty crescent air vent holes, giving it a ’69 and below style by removing the crescent vents completely. Swapping out the taillights for 68’s also helped to clean up the lines. Tri-Bar headlights and a gremlin bell were also added, as with all Airkooled Kustoms vehicles.

This 1971 VW Super Beetle was featured in Aircooled Classics, Issue #14.

There's a cute little chapel nestled down in the pines
Say you'll be mine little girl, and I'll put my foot to the floor Give me the word now sugar, we'll go ramroddin' forever more.
Ramrod
Bruce Springsteen

Most guys go for flowers when they’re trying to woo a woman. Maybe something small and sparkly, if they’re getting serious.

Not Ron Steadman. He does it a bit differently. Big and sparkly, actually. Correction: Big, sparkly, yellow and black, with an engine that goes vroom, vroom.
Warning: You may want to hide this chapter from your significant other, as it sets a precedent you may not be able to follow. You can just tear it out of the book – if you’re careful, nobody will know the difference.

The Super Everybody... and Nobody Wanted
Ron initially bought the 1971 Super Beetle for about $1,200 for his sister. He replaced a few pieces and parts and got it drivable. She drove it for a year, and then turned it over to her son-in-law to restore. Soon after, it changed hands again – briefly going to Ron’s mother. After just six months, it came back to Ron. There was too much that needed fixing, and nobody had the time or resources to do it right.

There it sat on Ron’s property. Over the years, the dull yellow paint morphed into a moldy green color some designer might have named “Hanging Moss”. It was taking up space, killing the lawn. Ron half-heartedly decided to sell it, and found an equally lukewarm prospect who actually knew the car from when it lived a couple towns over, in Madison, Alabama. No sale, though.

Still pondering his possibilities, Ron realized he needed to either sell that Super as is, or plunk down some money to resurrect it. Through a mutual acquaintance a few years beforehand, Ron found Airkooled Kustoms in nearby Hazel Green, Alabama. It was decided – they’d do a restoration for this poor little Super.

Then Ron Met Tammy, and that Plan Went Out the Window
Tammy took one look at this car and fell in love. She shared stories of driving a similar Beetle in high school, one that was yellow (no stripe). She’d been bitten by the Bug – a sort of dubsickness that never leaves a driver’s system. She told Ron that if he sold this car, she would just buy a different one.

So, Ron changed the plan. An all-out restoration, back to the bare steel and rebuilt using as much of the original core as possible – the end result would be a brand new 43-year-old car for his girl.

May the Restoration Begin
This is the kind of restoration project Spook and the krew love best – a client who knows what he wants, but leaves room for the guys to go a bit Darkside in the process.

If ‘dirty’ had been the only problem this poor Super had, that would have been one thing, but that word doesn’t begin to describe what the guys found. Top of the list, a pair of dead rodents of undetermined species, age, and time of death. There’s a reason the krew uses masks and gloves when cleaning out new arrivals. Also, after blast, it was clear that the car had been hit badly in the driver's front – and repaired even worse.

Says Spook, “Bumble Bee was one of the few cars in which we didn't find any, eh-hem, paraphernalia. Most often these cars were owned by children of the 60’s, which means they often come complete with bits and pieces of ancient herbal matter in deteriorating plastic bags and cigarette packs – and occasionally a device for usage of said herbal matter. We did find 12 pens (none working), one partial pack of cigarettes, six packs of dead matches, 37 cents, a hair clip, one earring, a set of Coke bottle glasses, and 4.5 pounds of generic car trash. Someone had loved this car enough to save it, but not to keep it up. Overall, Bumble Bee turned out to be an easy build that didn’t fight us at all.”

The shop also created a cleaner bodyline by fixing the rusty crescent air vent holes, giving it a ’69 and below style by removing the crescent vents completely. Swapping out the taillights for 68's also helped to clean up the lines. Tri-Bar headlights and a gremlin bell were also added, as with all Airkooled Kustoms vehicles.

Dub Fever – Highly Contagious
Somewhere not far into the restoration process, Ron decided he needed a classic VW of his own – preferably one he could fit his tall frame into without making driving feel like a yoga class. From the tender age of five, when Ron used to help his dad hauling hay (he stood to drive and had to jump on the clutch to shift gears), he’d also had a thing for Volkswagens. An old pro at the process by the second time around, Ron knew just what to do. We are now working on a 1961 Double Cab that may prove to be the most sinister Darkside build to date. Black on black on black, it will be fast and furious – a far cry from the friendly little Bee.

Behold, the Bee
Upon completion of the build, we hosted a reveal party at a local micro brewery in Huntsville. There amid oohs, ahhs, and some very dark beer, this Darkside beauty stung all in attendance, infecting a whole new crowd with Dub Fever.

Wherever the Bee goes, it draws smiles and stories. Everyone’s got a Dub story, whether it involves childhood trips with the family or crazy college exploits. Bumble Bee is best described as a happy drive.

Now, as often happens with love stories like this, you must be wondering what happened with Ron and Tammy. About halfway through the restoration project, Tammy married Ron. So, as wooing tactics go, the whole “build her a brand new, very old Dub” plan was a winner. 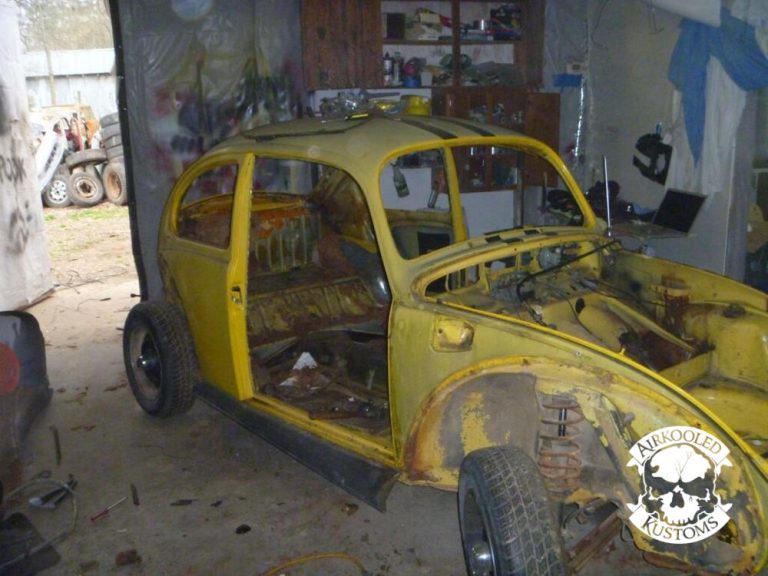