If you listen to the song “Sex and Candy” by Marcy Playground while looking at this car, you’ll understand. Mr. Ferguson wanted us to build him a 1969 Karmann Ghia Coupe that registered a 4.5 (out of 5) on the AKK project scale. This dressed to the nines full-rotisserie build is one of the most extensive restorations the shop has done to date, and it is jaw-droppingly gorgeous. In fact, everyone who comes to the shop for a tour finds themselves stopped in their tracks to gawk a little at this build.

And if this 1969 Karmann Ghia Coupe gets you drooling, you're not alone. Even Hollywood loves a great Ghia.

The Karmann Ghia is the pinnacle of automotive restoration. It has a classic construction and iconic shape that has been loved by many for decades. But it doesn't just look good. You'll also find a modern drivetrain with plenty of power, making sure it can keep up on today's roads!

The cars made by Karmann between 1955 and 1974 look very similar at first glance, but there are many differences in the details. It's definitely worth taking a closer look ...

The most obvious difference is in the bumpers. In the early 1970's, they went from the classic chrome multi-piece bumper to a one-piece with a crash bar hidden underneath. The later version also has a slightly different rear, with exhaust pipes set closer to the edge of the car.

Karmann Ghias were never sold in Germany when they were built. However, these days they are a very uncommon sight, with many of them still in use by classic car fans.

The original engine was a four-cylinder boxer unit. This gave more power than average for its time, but the Ghia also had a very silky smooth drive. The car was always more expensive than your average Volkswagen due to its hand built construction.

If you're in the area, or just passing through, be sure to make our VW Charity Car Show part of your trip.

Sometimes when a client brings you a 1971 Karmann Ghia, it turns out to be at least five different cars all brazed (not welded!) into one. That was the case with this build. As always, blast reveals all. So, the parts car we sourced became the Karmann Ghia Restoration project car instead. The owner was building this Ghia dream car in his head since was just a kid.
Read More 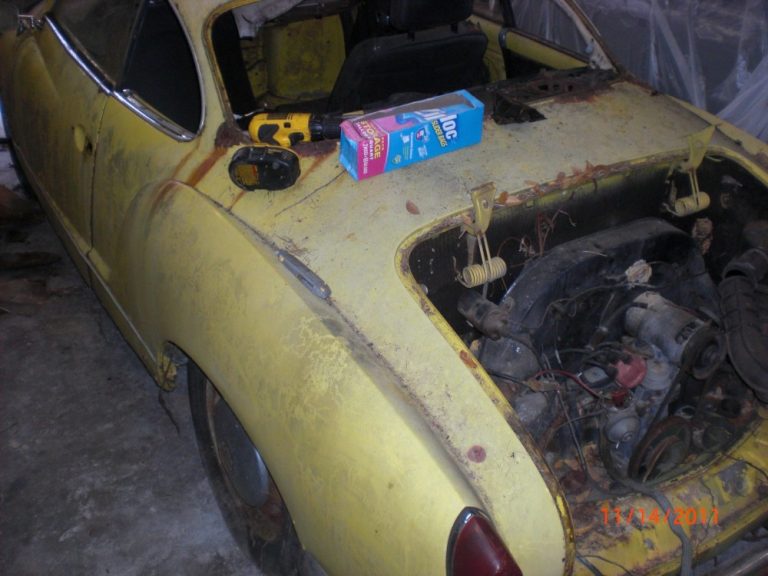