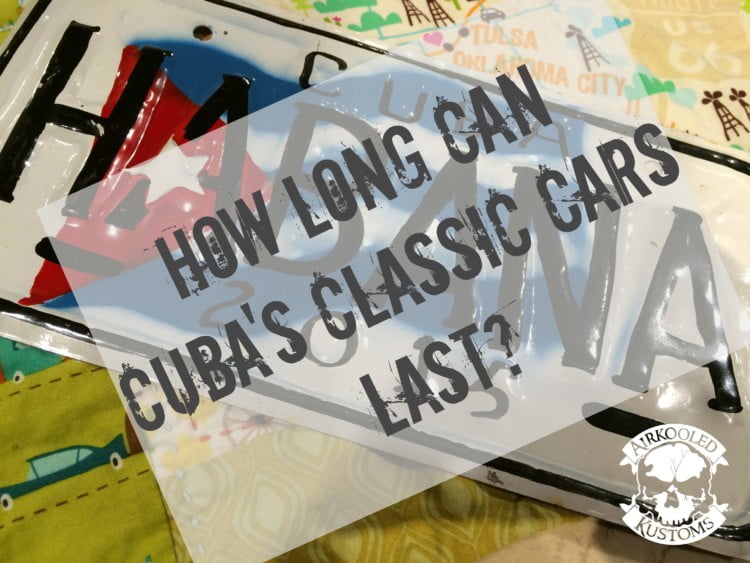 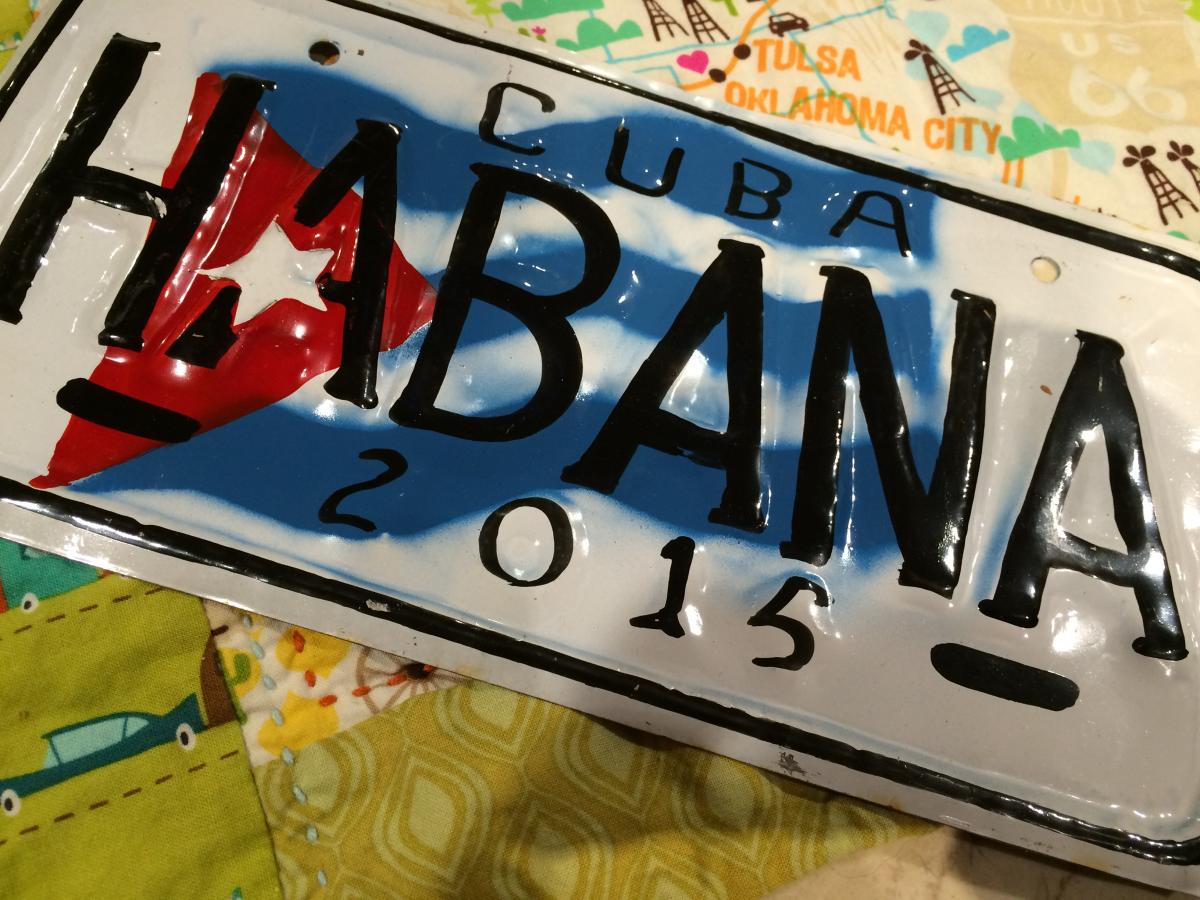 The ingenuity in the face of their lack of supplies and parts is pretty much MacGuyver these cars to keep them rolling reaches genius level. It's phenomenal what the Cuban drivers have been able to do with basically no resources. They've adapted other technology and machinery to be able to keep these classic cars alive.

As Wayne and Garth would say, "We're not worthy!"

A good life lesson on doing what needs to be done.

How Those Classic American Cars Survived The Embargo : NPR

Cuba's cars are impossible to ignore. It's like seeing a celebrity and trying not to stare. David Gilkey/NPR

Cuba's cars are impossible to ignore. It's like seeing a celebrity and trying not to stare.

The Car Talk Guys Weigh In On "How Long Can Cuba's Classic Cars Last?

Car Talk's Ray Magliozzi is in Cuba. He talks to Robert Siegel about the old American cars he's seeing on the streets of Havana.

About a year ago, I went to Cuba for the first time, and I took some time to appreciate the famously still operating 1950s American cars on the streets of Havana. I was impressed. But what do I know? Now a real authority is spending the week in Cuba, and he took some time out from his astute observations and perhaps a few mojitos to tell us what he thinks of the classic cars of Cuba. I'm joined now by Car Talks' Ray Magliozzi. Ray, how you doing?

RAY MAGLIOZZI: (Laughter) Hi, Robert. How are you doing? You left out the Cohibas (laughter) - mojitos, Cohibas and the cars (laughter).

SIEGEL: It's a dirty job, but somebody's got to do it. First, what exactly are you doing in Havana?

MAGLIOZZI: What are we doing?

SIEGEL: Apart from the Cohibas, mojitos and drinking the mojitos and looking at the cars...

MAGLIOZZI: Is there a goal? Is there an intended purpose?

SIEGEL: (Laughter) Well, not to put too fine a point on it - yes.

MAGLIOZZI: Robert, we're being journalists for goodness sakes, and we're trying to ascertain how these cars stay on the roads.

Let's Get Down to Business and Answer the Question!

SIEGEL: So tell me. As I observed, you probably saw some exceptional cars driving around in Havana. What do you think? What is this - does it make you feel young again?

MAGLIOZZI: Well, exactly that. I mean, I obviously haven't seen cars of this vintage since I was a little kid.

SIEGEL: What do you think about the maintenance of these cars - think you could have kept as much of these cars on the road as you see in Havana?

MAGLIOZZI: No. I've been constantly impressed by the cleverness and the sheer determination of the people who keep these cars going. It's amazing. So lots of the cars that we've taken as taxis, for example, do not have the original engines. But, you know, it's funny. Stuff I read about Cuba before I came suggested that it didn't really make much a difference how they put these cars together because most of the roads were dirt roads. Nobody went over 20 miles an hour, and the cars were just a curiosity and a conveyance that was not to be relied upon. However, that couldn't be farther from the truth. These cars, you know, driving 50, 60 miles an hour (laughter). I was very happy that they put as much effort into maintaining the brakes on these cars as they had the engines and the transmissions because, you know, with no seatbelts and metal dashboards, it could be over in an instant (laughter)...

MAGLIOZZI: ...If you know to mean.

SIEGEL: Yes, I know what you mean. And somehow they had to do this - getting parts. I mean, you can have a new engine under the hood. But you know, the dashboard should still look like the dashboard, and all of the appurtenance of the car should look appropriate. So...

Cuba - Where a Late Model Dates from the 50's

MAGLIOZZI: Well, interestingly, I rode in a taxi yesterday that had had also a complete dashboard transplant. It was a late-model GM - late-model (laughter) 50...

MAGLIOZZI: '58 Oldsmobile had gotten a whole new instrument panel, and he said he got it from the states. So he must've had a relative bring this thing in, so it was something that was customized to fit into that hole that had existed for the original instrumentation. So it had a new ammeter and a new oil pressure gauge and all that, and they all worked. I have yet to see a car, however, that has a speedometer that works.

SIEGEL: (Laughter) I see. I see. Are there any pollution controls in these cars?

MAGLIOZZI: Are you kidding?

MAGLIOZZI: The only thing that's kept us from keeling over is the paucity of cars on the road.

Do Cubans Love Their Classic Cars?

SIEGEL: So tell me, I mean, Ray, which do you think is more the case? Do you think that Cubans hungry for a post-embargo era can't wait to get a hold of some 2016 model Hyundais and Nissans or that this shtick has really become part of Havana's culture, that people want to drive around in 60-year-old Chevrolets?

MAGLIOZZI: Oh, I think people would lunge at the newer cars in a minute if they could afford them. I don't think there's any question about that. You know, I mean, while this is fun and it's been done obviously out of necessity, I think if newer cars were to come in - first of all, it would change the Cuban economy tremendously, so there's going to be a lot that's going to happen. But I think that - there's no doubt in my mind that the average Cuban, if he had a chance, would love to drive a new car.

SIEGEL: Well, Ray, thanks for sharing the fruits of your journalistic investigation with us.

MAGLIOZZI: Robert, it was my pleasure.

Copyright © 2016 NPR. All rights reserved. Visit our website terms of use and permissions pages at www.npr.org for further information.

NPR transcripts are created on a rush deadline by Verb8tm, Inc., an NPR contractor, and produced using a proprietary transcription process developed with NPR. This text may not be in its final form and may be updated or revised in the future. Accuracy and availability may vary. The authoritative record of NPR’s programming is the audio record.

via 'Car Talk' In Cuba: How Those Classic American Cars Survived The Embargo : NPR