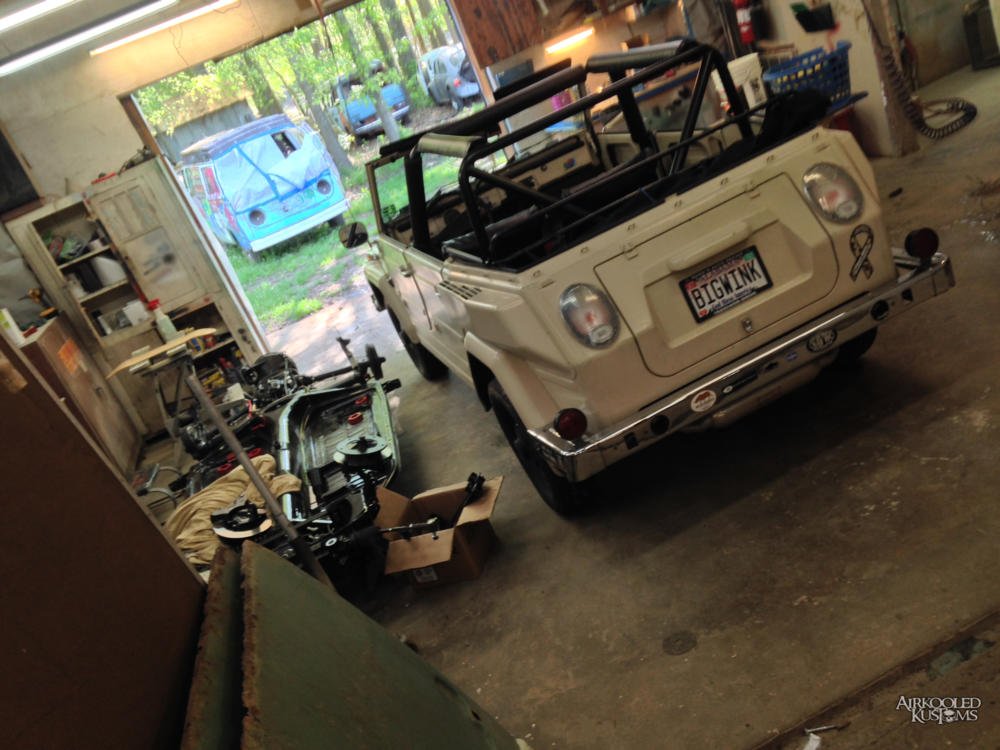 Well, it ain't pretty, and it sure isn't a best practice in safe use of towing apparatus... but Wink's Volkswagen Thing made it to the shop for some much-needed repairs, upgrades, and tweaks.

Wink's Thing often accompanies the shop and krew to the regional VW shows we sponsor or attend. It's a fixture - and trophy winner - at Bug-A-Palüza, and remains one of the koolest Things out there.

Spook's had a to do list brewing for this beast for quite a while, but Wink, being Wink, can be a bit stubborn about surrendering his ride for a little while. That said, there are improvements underway to the steering system, brakes, and some cosmetic issues as well.

If you're part of the classic VW community, you know there's a certain sense of brotherhood fostered by a common love for these vintage vehicles. Spook and Wink give a quick demonstration of how this kind of friendship works... it is explicit, but said with love. (You've been warned!)

People are always saying we should have cameras rolling here at the shop. This is probably about the most perfect snippet of what you'd see if you were here often.

Ever Been Shocked by a Volkswagen Thing?

Gooding & Co. recently sold a 1974 Volkswagen Thing at auction for a price that might surprise you. In fact, its sales price actually set a new world record. Amid the likes of Lamborghinis, Mercedes, and Ferraris aplenty, this 1974 Volkswagen Thing Acapulco Edition went for a whopping $52,800.

You can read more about this auto auction here: www.Yahoo.com/autos

So, maybe Wink's Thing isn't going to command that kind of coin tomorrow - but as these vintage Dubs become harder and harder to find, their value continues to climb... especially for those that have been restored and cared for long-term.

Did you know that Airkooled Kustoms HAS a Volkswagen Thing that's just waiting to be resurrected? It's a goodie that Spook picked up last year and has stashed away in the corner of the Boneyard. Once the shop has completed Ms. Mabel, this Thing may be up next. Maybe Harley's Thing needs to be jacked up like a monster Dub, and this one could be slammed as low as they go. Will be fun to watch what happens!