When you see this 1969 Karmann Ghia in all her glory, you might swoon. She's that pretty.

But when you read the story behind this 1969 Karmann Ghia build, you might cry... and then smile. After all, who doesn't love a happy ending?

We're really proud of VolksAmerica and glad to have the opportunity to contribute to this excellent magazine on a regular basis. Sometimes, it's a tech article, showing readers how to tackle a restoration or maintenance task. Sometimes, it's the story of a build - and every build has a story.

Here's the story of the Currans' 1969 Karmann Ghia. It's almost like a country song... in reverse. You'll see. 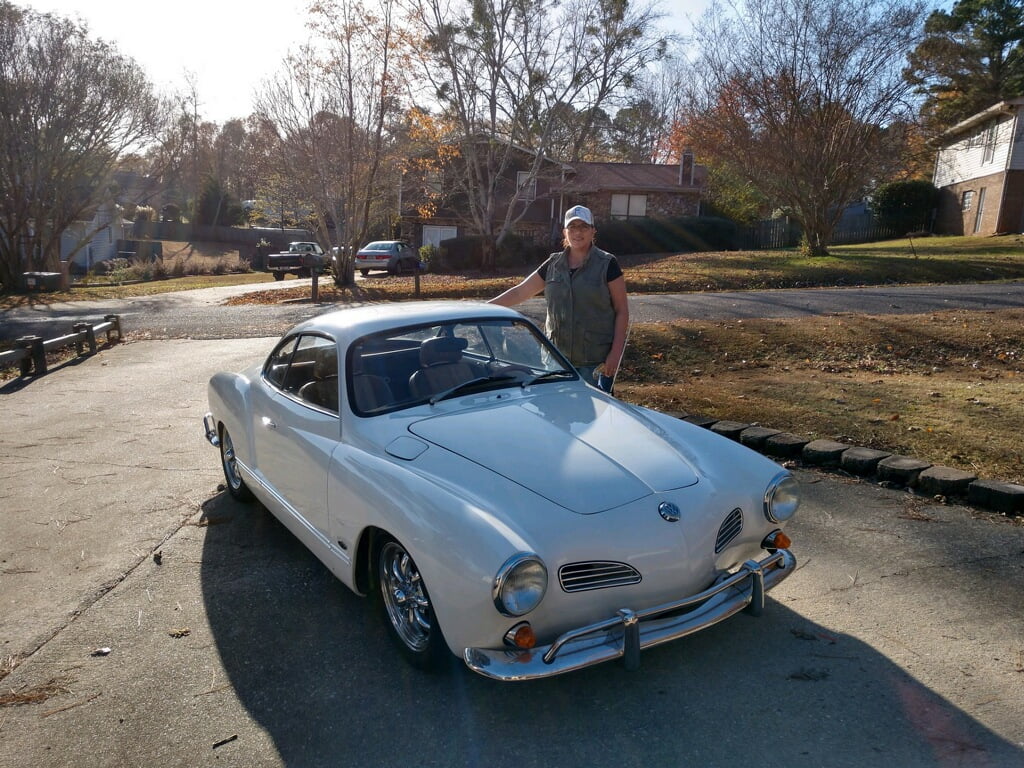 It’s The Thought That Counts, Right?

Buying just the right present for someone you love can be tough. By the time we reach a certain age, it’s like, “If they really wanted it, they’d already have it.”

But when Margo and Brian Curran chatted about their upcoming trio of big milestones – they were both turning 50 and coming up on their 25thwedding anniversary all in the same year – they knew just how to do it right, Volkswagen Karmann Ghia style. After all, what better way to celebrate longevity, faithfulness, and fun than to do it in a classic Volkswagen?

Margo had loved Ghias from the time she was little. A favorite uncle who’s since passed had one, and early on, she’d fallen for the sleek curves and quirkiness of these beauties. Not only was this going to be fun to drive, their Ghia would also serve as a lovely tribute, a way to rekindle her memories of her uncle.

What Is It They Say About The Best-Laid Plans?

The Currans bought a Ghia that was advertised as having been partially restored. Sight unseen, halfway across the country. This bold move turned out to be the first step into heartache. The second step was taking it to a shop to complete the restoration.

Know that feeling in the gut when you suspect you’ve made a horrible mistake? That was next in the trajectory of this debacle. It was only when the Currans showed their new old Ghia to a neighbor that their uneasiness found a voice. One look in the engine bay, which was riveted together, and their neighbor urged them to take their poor Volkswagen Karmann Ghia to someone who knows what they’re doing. First up, getting a bumper-to-bumper check-up to make sure it was roadworthy.

After a conversation with Airkooled Kustoms in Hazel Green, Alabama, the Currans knew they’d finally found someone who’d shoot straight with them. The shop’s engine builder, “Crazy Uncle Floyd” Husband, took a two-hour road trip with the trailer to fetch it.

“Shoddy” is not a strong enough word for the restoration work done on this ride. There were zip-ties holding the frame together. Yes, plastic zip-ties. That wasn’t the half of all the death-trap features included in this travesty of short-cuts and cosmetic improvements.

Within minutes of getting the Ghia onto the lift, the shop’s late Roger “00-Dub” Moore knew he had a very unpleasant phone call to make. Sure, the shop could tear it all down and start fresh, but who knows what other surprises were in store?

Bad News, then a Good Idea

After breaking the bad news, he told the Currans he had an idea. Just yards away from the shop, there was a similar Ghia, completely unrestored and yet in way better shape. As if he somehow knew his days on earth were coming to a too-early end even then, he admitted his plans to one day restore this ride were unlikely to come to fruition. It was a solid core, and even unrestored would leave the Currans in a better situation than they were currently in with the hunk of junk on the lift.

They said yes. The “lipstick on a pig” ride went bye-bye, off to become some brave soul’s project car (all faults disclosed prior to sale, of course). The solid core began its journey through the restoration process. 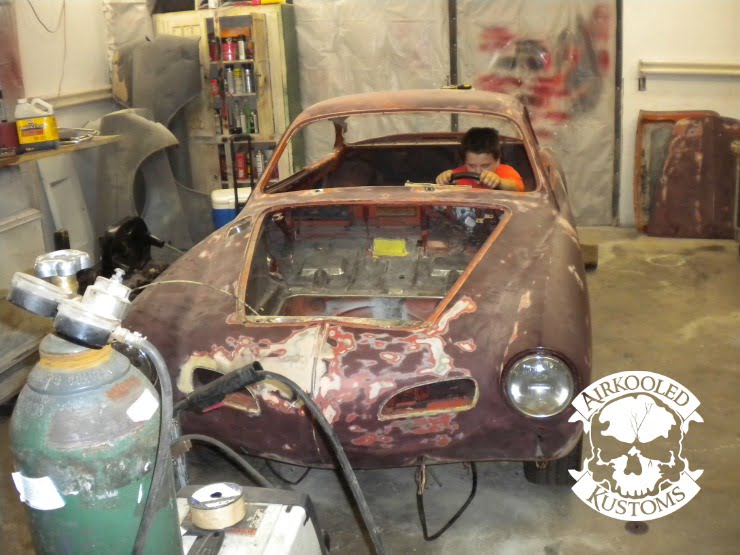 Here’s What We Did to this 1969 Karmann Ghia

Transforming this ride from one that was unsafe at any speed – or even standing still – into a reliable and gorgeous brand new, very old car began with a swap out. The 1969 core took on a disk brake upgrade, an upgraded suspension package with rear sway bar, and a 3” narrowed beam.

Then it got a kustom paint job, a tri-stage double ice white jaw-dropper Spook named Snow Blind while he was working on it, and renamed it Whipped Cream once he was done. In the sunlight, you’d understand how this color inspired so many names. Mountain Honey did the semi-custom interior.

For more go, go, go, we dropped a 1776 cc engine in, backed by a Stage 2 transmission from Tony Walker at Aircooled Werks. All that gorgeousness rolls past you on EMPI eight-spoke aluminum rims.

As with all complete restorations at Airkooled Kustoms, this gorgeous Ghia boasts three signature skull logo imprints in her paint. Brian says he’s hunted for them, but still can’t find them. That means the $100 bill in Spook’s wallet, earmarked for any client who can find all three, is safe… for now.

The Gift That’ll Keep On Giving

Now that the hard part’s over, the Currans get to the good part – enjoying their Ghia. Like many classic car owners, this ride’s got a name: Storm, like in the X-Men.

They’re babying Storm, of course, since she’s an antique. But you might catch a glimpse if you’re in the right place at the right time, cruising around one of the scenic lakes near Pell City, Alabama.

You’ll find Margo behind the wheel, most likely. Brian’s only driven it once since Storm’s restoration wrapped. They get head-turns everywhere they go, and as you’d expect, lots of conversation about how Storm brings back memories of their Dub. It took some doing, but the Ghia of their dreams is finally the one in their driveway.

Some Parting Words of Wisdom

Honestly, it takes a lot to gross Spook out. Roger was the same way - and the whole krew in the shop, too. These guys get gashed, smashed, and burnt on the regular. They've cleared out decades' worth of dead vermin, old food, and even ancient used diapers in the process of starting restoration projects.

But that's all part of the job.

Seeing a client get ripped off, though? That's where they get disgusted.

Spook recounts the moment they put the Curran's original "restored" up on the lift to figure out why it wasn't running quite right. What you'd expect to see as the lift rises is a car that might be a little dirty, but that stays "solid" as it goes up. NOT one that bows in the middle. Their "something's not right here" led to the discovery of the zip ties. From there, it was like going down a rabbit hole of botched repair shortcuts. To know these lovely people had sunk good money into such bad workmanship was enough to turn his stomach.

I asked what the cautionary tale is here.

If you're buying a vehicle to restore, get someone you trust to inspect it closely before you buy. That goes double if it's already been restored. For a couple hundred dollars, you'll buy yourself some peace of mind, knowing you're not about to get some really bad news that comes too late.

You can find out more about this 1969 Karmann Ghia build and see hundreds and hundreds of more photos here. Plus, if you attend this year's Low Down in Dub Town, you can feast your eyes on restorations just like this one.