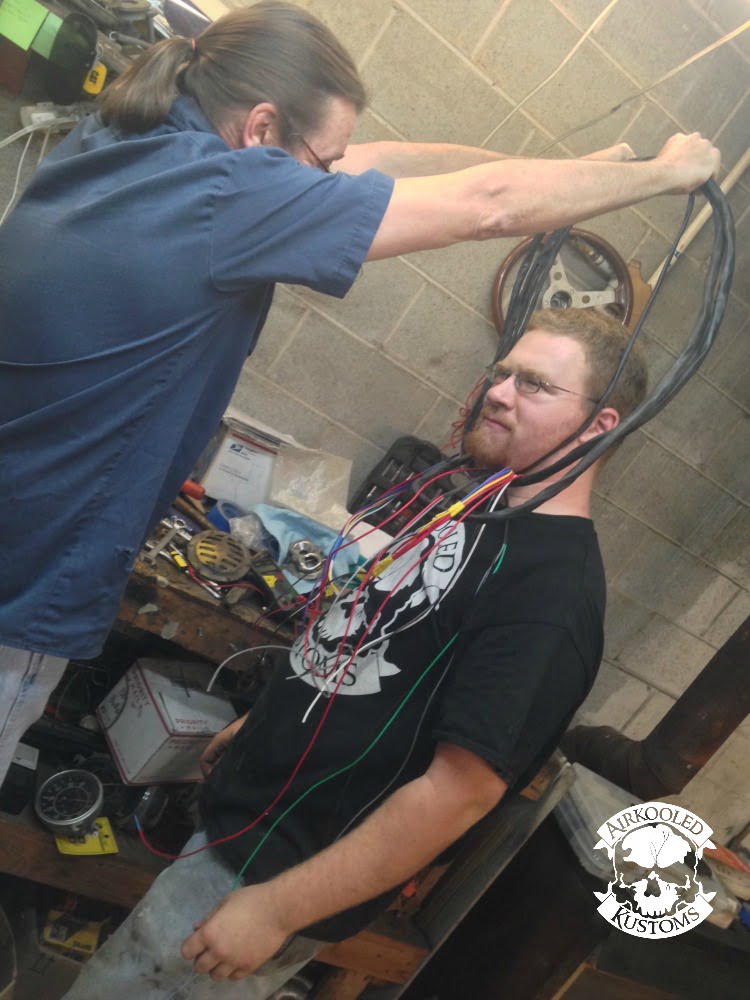 Watch what 00Dub is about to do to the 1959 VW Beetle wiring harness for Miss Mabel, Airkooled Kustoms' entry into the Ultimate VW Build-Off in Las Vegas, October 2015.

Expose most folks' wiring, and you'll see what looks a lot like rainbow colored spaghetti. It's understandable - after all, not too many people like working with invisible shock juice. Easier to just hook it all up as best you can and then forget about it (until something comes unhooked or shorts out).

Even though electrical work isn't 00Dub's favorite part of a VW restoration, his Zen Master demeanor makes him well-suited for it. In fact, one look at how he sets up this wiring harness could be a lesson in "doing it right" - words we live or die by here at the shop.

Wonder if he lines up pasta like this before eating it?!

Miss Mabel is about two-thirds of the way complete at this point. As with all restoration projects, every phase of the build has lots of small details to finish. With most projects that come through the shop, it seems like the point of paint 'feels' like the project's just about done (at least to everyone who's not working on it!). That's probably because it's such a visible milestone.

Still so much more to be done, and the build already has more than a thousand hours in on it. Thank goodness we started with a solid core. With some projects, the core is in such bad shape - mostly rust and bad prior 'repairs' - that significant body work has to be completed before any progress can be seen. We've had vehicles come in that looked like Flintstone mobiles (no floor), others that had bizarre body work done in the past (cement? Mexican newspapers? and of course, BONDO). The cores that come up from Florida or other coastal environments with salty air show the worst damage from rust - but no matter where they come from, if they've got rust issues that haven't been addressed appropriately, there's going to be some serious body work ahead to save the vehicle.