VW Body and Chassis Mating (Not what you might think) 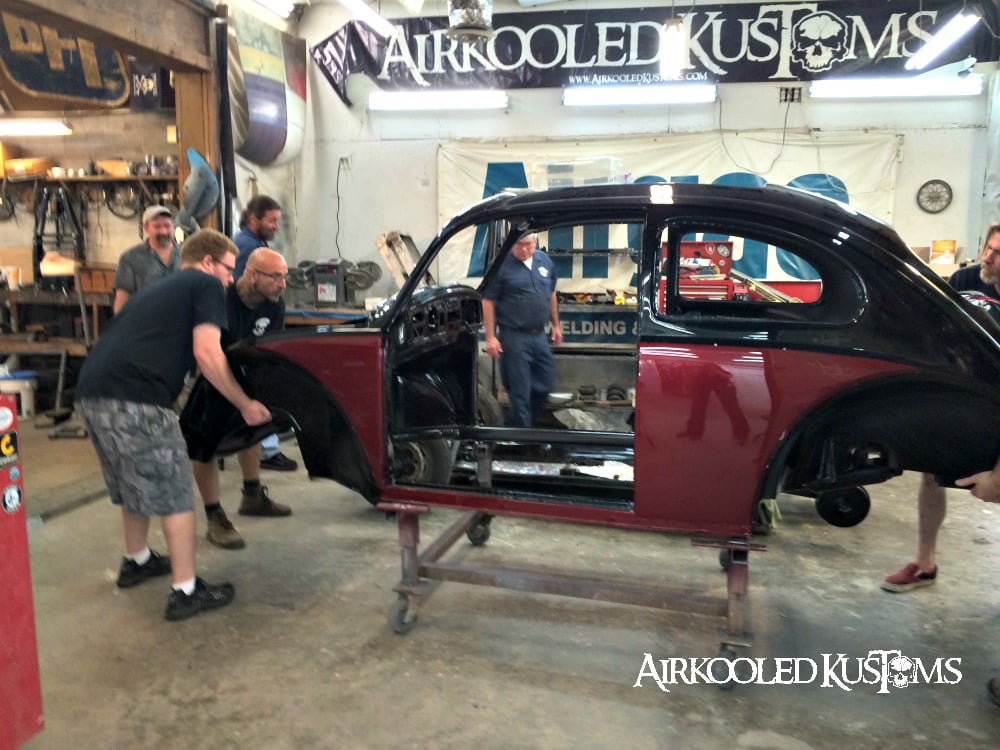 So, how do you put a 1959 VW Beetle back together again after taking it apart down to the tiniest component? And how do you do it without nicking about 183 hours' worth of glassy, glossy paint finish (to date - not finished with the finish yet!)? Oh, and let's do this without hurting anyone's back, fingers, toes, or anything else.

You assemble a team of guys who all care a LOT about the project, who've done this before, and who work well together - and ONE guy to do the directing as it goes down. Watch as the Airkooled Kustoms krew mates Miss Mabel's body and chassis. It happens fast - less than 56 seconds. Lots of forethought and planning.


Oh, and if you're trying this at home, remember... beer only happens afterward. As this was mid-morning, there was no beer - just donuts.

Also, if you're inviting your friends to come help you with the mating on your car, you *might* want to clarify what this IS, and what it IS NOT. Some folks get a little confused and excited, and are likely to show up with candles, matches, and a Sade mix tape to help get things going. Nobody we know, of course.

So, in case you're new here, this is Miss Mabel. Mabel is a 1959 VW Beetle Ragtop that's being built as the shop's entry in the Ultimate VW Build-Off in Las Vegas, October 1-4, 2015. She's a Dub that followed Spook around for years, practically begging for a restoration.

As you might guess, the cobbler's kids are typically running around barefoot - and Mabel was no exception to that rule. From the time Airkooled Kustoms opened in Hazel Green, AL, back in 2005, it's stayed busy. In fact, sometimes you can barely walk through the shop without "sucking it in" to make sure you don't scratch the finish of any of the gorgeous Dubs on the shop floor. It's a good thing Spook bought the adjoining acreage a while back - it serves as the waiting room for VW restoration projects whose time has not yet come.

Anyway, Miss Mabel's turn finally came when the shop got invited to compete in this rather exclusive build-off with the nation's top Volkswagen restoration shops. Kind of a different project, because there's no client funding the build - it's on the shop. Also, since there's no client directing the project (I'd like this, and this... but not that), the guys are dreaming up the most creative, stealthy details to include with the only limitation being the guys' imagination. Oh, and the $20K parts cap specified by the competition rules.

Lest you worry that she's going to be a garish mishmash of after-market add-ons, first of all... you must be new here. Second, let us put your mind at ease by sharing something a wise Dub guy once said (on Thursday, probably)...

To quote 00Dub, "If (any detail) stops your eye in the flow, it doesn't belong there." Every single mind-blowing customization on this build blends in perfectly. You wouldn't even know it was there, unless you knew it was there - and even then maybe not.

In fact, most of what's most amazing about this build is what you DON'T see. (And that's saying a lot, considering that what you DO see is drop-dead gorgeous.)

For example, the electrical. The wiring harness is so ninja-stealthy that even the most OCD (er, CDO to keep it alphabetical) among us will make 'that' face in examining it. You know the face - the one that basically says, "Oh. Wow. That is badass" because it is extraordinarily tidy and orderly.

Anyhow, if you'd like to watch this remarkable build in progress, be sure to visit Mabel's VW restoration page here.

And if you'd like to sponsor this Ultimate VW Build-Off project and get your name listed on the AKK site - and an exclusive build t-shirt designed by Snoopy (as well as other very kool bonuses), here's how to make it happen.